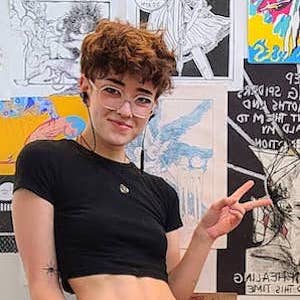 SUMMER WAR is a series of conceptual prints exploring the phenomenon of the binaries we create to find order in our lives: male and female, self and other, good and evil, victim and perpetrator. Rather than fitting neatly in these binaries, most of us find ourselves in a fearful purgatory of both, unable to name ourselves in a way that feels genuine. SUMMER WAR seeks contentment with the in-between place and its inhabitants, asking questions of what it means to truly escape gendered and moral duplicity and, reaching neither shore, finding safety in the expanse between known and unknown.

Being neither man nor woman has given me a complicated perspective on how I align myself with labels that we adhere to out of a need for recognition. I am at once invisible and too visible, and I reside in the space that people cannot define: I fear others, and in turn, they fear me. I created SUMMER WAR to honor the love I have developed for the uncharted territory I find myself and other trans individuals inhabiting: one that is both feared and eroticized, demonized and glorified, coherent and esoteric, male and female.

Functionally, the summertime operates as a straddling point for most young people, who find themselves between the years of their lives that mark their age and social standing. Fighting the summer war means to be in no-man’s land, a place and time belonging to both the past and future. My experiences this summer have led me into the loving, hurting, and terrified arms of other trans young adults who, now more than ever, find themselves ripped loose from all normalcy in the purgatory between childhood and adulthood.

Further than that are the constant questions of morality that we all must face as consumers in a dying world, as speakers in a network that tries very hard to categorize us as ‘good’ or ‘bad’, and as people who hold the ability to both hurt and be hurt in equal measure. In order to move forward we must accept and celebrate our complexity and our wrongdoings as equally as we celebrate our accomplishments and joy. SUMMER WAR hopes to reach into the experience of true human ambiguity and find some contentment in the shifting, unknowable place we find ourselves in.

Unblocked access to Google Drive and Youtube is required to view embedded images/videos of the artists and artwork.

No comment yet! Be the first to add one!