Use the slider arrows below to reveal different components of this piece that correspond with the legend below.

Rose Briccetti, Bougainvillea and Reverse Drag Triptych: Jeanne Baret in an Edenic California Sunset, a McMansion, and a Wildfire, 2018. Courtesy of the artist. Click here to view detail.

1. Admiral Bougainville
In 1766, Admiral Louis Antoine de Bougainville set out on the first French expedition to circumnavigate the globe.

3. Batman’s Poison Ivy
She’s sometimes a villain, sometimes with the good guys, but one thing’s for sure–this sexy plant lady will give you a rash.

4. Not A Eunuch
Peasant herb woman Jeanne Baret was smuggled aboard Bougainville’s ship by her lover, voyage botanist Philibert Commerçon. She served as his assistant, dressing as a man and claiming to be a eunuch.

5. Not A Flower
One of Baret’s discoveries on this voyage, made in Rio de Janeiro, was a flower also in disguise: the bougainvillea. The plant’s colorful portions are actually special leaves that surround small white flowers. Commerçon named the plant for admiral Bougainville.

6. Another Old White Dude
Botanist Philibert Commerçon was difficult, sickly, and not particularly nice to his lover/nurse/maid/assistant Baret.

7. Banks’ Florilegium
Florilegium is really fun to say. Banks’ includes this stunning bougainvillea etching which first interested me in the plant.

8. Look What I Found
Baret’s floral discovery may have been found in a futile attempt to find a botanical medicine for her ailing lover’s leg wound. It didn’t work for ol’ Philibert, but the plant does possess birth control and abortifacient properties.

9. Frida Kahlo
Kahlo used thorny bougainvillea branches in her work and wore them in her hair, along with weird baby hand earrings.

10. Genus genius
There’s an unwritten rule that scientists don’t name species they discover after themselves. Commerçon did it anyway.

11. Jumanji
There was a vine at my old apartment that once grew through a gap under my door. I let her grow and she made is all the way to the dining room before dying.

12. Pregnancy Test
Baret gave up the lovechild she (presumably) had with Commerçon. He died in foster care before his first birthday.

14. RIP
Bougainville’s ships docked for a prolonged period in Rio to investigate the murder of their chaplain.

15. Sexy Nurse
Baret’s botanical knowledge made her a competent medical professional, serving as a nurse for Commerçon.

16. Reverse Drag
I stole this image and painted out the watermark. It’s one of the first results when you google “woman dressed as man.”

17. Proceed with Caution
Baret became the first woman to circumnavigate the globe. When her gender was discovered in Tahiti she was violently gang raped.

18. Burn Baby Burn
In December 2017, the largest wildfire in California history occurred a few miles from my studio. I tented my drafty studio with plastic and bought an air filter while finishing this panel.

19. Woof
Commerçon suffered a dog bite to the leg, preventing him from doing much hard labor on the voyage. Baret did most of the dirty work.

20. Pucker Up
Flowers are sex organs humans like to gift one another. So of course, our species would also invent an orifice couch.

21. French Maid
Baret may have become Commerçon’s maid while he was still married.

22. You Should Get that Looked at
Commerçon’s leg eventually became gangrenous. He died in Mauritius.

“My recent work investigates the intersection of natural and cultural histories of plants used medicinally by women to control their fertility. For thousands of years, botanical abortion and birth control treatments were widely available, but much of this knowledge and history has been lost. Women and indigenous peoples’ knowledge was often excluded from medicine as it became professionalized, and as a result reproductive autonomy and human health and knowledge in general have suffered. This series retraces, complicates, and narrates the history and iconography surrounding particular species of common plants with anti-fertility properties to revive this history.”

Use the slider arrows below to reveal different components of this piece that correspond with the legend below.

1. Grenades
The pomegranate was long known a the “grenade,” from the Spanish “granata.” The explosive weapon is named from the “…many-seeded fruit suggested the powder-filled, fragmenting bomb.”

2. Shirley Temple
As a 20 year-old waitress, our bartender wouldn’t serve me. I’d have a Shirley Temple (Sprite + grenadine) with my coworkers post-shift.

3. Grenadine
The pomegranate syrup always behind the bar makes more than just Shirley Temples, but is almost always named Rose, like me.

4. Cutting Ribbon
When I was little, during the Gulf War, my mom made a yellow ribbon “Support Our Troops” flag to hang outside our house. I helped her paint some of those little foam balls for the end of the flag pole.

5. Roasted Grill
Child star Shirley Temple (namesake of the cocktail) was the subject of much body scrutiny. There were rumors her teeth were fake and that her she was actually a little person because of her stocky physique.

6. Wigging Out
Temple’s curly hair was also rumored to be a wig.

7. Purse-phone
A play-on-words of pomegranate-eating goddess Persephone. And Betsy Johnson actually makes this purse which I came across in a Marshalls.

8. Seeds vs. seed
The pomegranate’s birth control and abortifacient properties were known to the ancients and proven in contemporary rodent studies.

9. Bernini’s The Rape of Proserpina
Critic Rudolf Wittkower noted that Bernini’s dynamic depiction of rape became the standard for depicting rapes for hundreds of years. It’s my dad’s favorite sculpture.

10. Stealth Bomber
The military breakthrough of the 1990s and an American icon of my childhood, years these bad boys need 47 hours of maintenance for every one hour of flight.

12. Lookin Like a Snack
After abducting and raping Persephone, Hades gave her pomegranate seeds to eat, cursing her split her life between the earth and underworld, with winter occurring while the goddess of plants was below ground. It is hypothesized that this legend pomegranate seeds leading to bareness was an allegory for their anti-fertility properties.

14. Don’t Call Me Shirley
Child star Shirley Temple’s first role, at age 3, was as an exotic dancer in an all-child spoof film called War Babies. In the film, she gets her first kiss.

16. Forbidden Fruit
Eve’s Forbidden Fruit was likely originally a pomegranate rather than an apple, probably mistranslated over the centuries. Her mythology is likely tied to the Persephone’s before her.

17. This Crest
Has a pomegranate and was online. Doesn’t mean shit but it looks cool.

18. Persian Rug
Native to the near east, pomegranates are frequent motifs in Persian rugs. My broke ass has a fake oriental rug from Marshalls that was only $79.99. Really ties the room together.

19. Walk Like an Egyptian
“Eat a pomegranate and visit a bath; your youth will haste back.” ‐Ancient Egyptian proverb.

20. Insane in the Membrane
When soldiers came back from the Gulf War, many presented unexplained symptoms colloquially now known as Gulf War Syndrome. Brain scans show abnormalities, though 80% of claims are denied by the VA. According the VA website they “prefer not to use the term ‘Gulf War Syndrome’ and instead call them ‘unexplained illnesses’ and ‘chronic multisymptom illness’.”

22. Hinterland
As a child of the 1990s, the Middle East has been a war zone my entire life; during my childhood, the enemy stopped being the Russians and terrorists stopped being white.

24. Digital Camo
My entire life, US military camo has been desert colored. In the early 2000’s, that camo took on a pixelated, digital look. To me, digital desert camo seems like the perfect symbol of 21st century America. 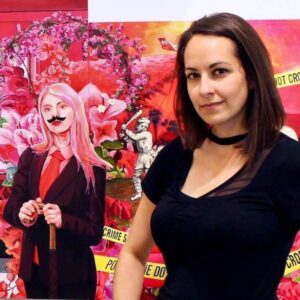 Rose Briccetti (she/her) is an intermedia artist living and working in Gainesville, FL where she is a Visiting Professor of Painting in the Expanded Field at the University of Florida. She has a BFA from the Sam Fox School of Art at Washington University in St. Louis and an MFA from The University of California, Santa Barbara. Her work has been exhibited at venues including SOMArts (San Francisco, CA), The Art, Design, and Architecture Museum, (Santa Barbara, CA), Glass Rice (San Francisco, CA), The Dickinson Museum Center (Dickinson, ND) The University of California, Santa Barbara’s Special Collections Library (Santa Barbara, CA), Eastside International (Los Angeles, CA), and Left Field Gallery (San Luis Obispo, CA). Her work has been featured in Flavorwire, The Advocate, Jezebel, and Apartment Therapy.