I was in 6th grade when my grandma,
Holding my head against her perfumed cardigan,
told me that
“Motherhood is a gift. It is the
Birth of a child that completes our lives,
That makes us into happier wives.”

Motherhood is a gift, with spices as her love language, like —
A dash of sugar when I spill the tea,
Sarcastic nutmeg on the way home from school,
An angry turmeric waiting for me at the dinner table.

Motherhood is a gift,
For the children who grow up in rocking chairs,
The ones who know hunger as
A 3 pm gummy bear. They think they are
“Mother enough,” but that is far

From motherhood,
Because there are
girls in my class who bleed unspoken pleas,
Whose mothers don’t cook with spices,
But with words like hot oil.

See, motherhood is not a gift.
There are mothers in crumpling houses
being beaten and berated. A husband
tossing beer bottles like confetti
screaming, “living is overrated.”

For her, motherhood
Is a nightmare.
Is watching her children grow up like their fathers.
Is the taste of blood in the mouths of their daughters.

Motherhood is not always a wanted gift. It is not smothered
In colorful tissue paper, no bows plastered on the sides.
When I don’t want a gift, I politely decline, say
“Thank you so much, but I can’t accept this.”
However, in Texas, a lady is not allowed to decline motherhood.
The gift is shoved down the throats of women,
Aborting their rights to have a choice for their own bodies

Pro-lifers will say,
“We value the life and dignity of every human person,”
Except where is the value for these young women,
For the children born into poverty,
For the broken homes they might be faced to be raised in?

Motherhood is Amy Coney Barrett in an apron, living a comfortable life.
— a woman who loves so much,
That her affection for seven children is not simply enough.
She loves motherhood so much that she believes it is the only choice
for the women of America,
Illegalizes our option of saying no
to her “gift” of motherhood.

I wish motherhood was a gift everyone could enjoy,
An open gesture of affection.
But motherhood is not always a gift of love.
Instead, it can be the salt in a victim’s battle wound,
Forced to prolong the unwanted experience,
And now burdened to raise her child in this
selectively-forgiving world.

Sometimes, motherhood is not a gift, but a
vehicle of destruction, the blinding of our eyes
From Carolina reapers and ghost fathers, heralded
By the sharp cry of a newborn.

“The pro-life movement’s arguments are rooted in the idea that all people are treated equally in society and in reproductive health. They believe that choosing to not abort a pregnancy is saving a life. However, this is untrue. Looking at the underserved, BIPOC, and impoverished communities, being forced to keep a pregnancy can be, in essence, the loss of life for the pregnant and their families.

A limit on abortion is an act of reproductive injustice — burdening already-struggling people with a pregnancy that could risk their lives and jeopardize their futures. A ban on abortion disproportionately affects those with a lack of access to pregnancy healthcare, mental healthcare, supportive families, and many other resources that are not given to marginalized peoples.

My poem expresses this idea through its comparison of an idealized motherhood by the well-off with the struggles that others face with pregnancy, home-life, and society.” 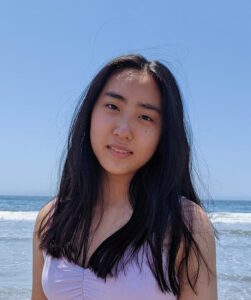 Anna Yang (she/her) is a 17-year old second-generation Chinese-American poet, artist, and social justice advocate. In the words of Audre Lorde, “Poetry is not a luxury. It is a vital necessity of our existence.” Thus, she writes poetry because it gives a voice to those who go unheard, spinning thoughts into stanzas and bridging divisions with the unveiling of common humanity. She has been recognized by the Scholastic Art and Writing Awards, New York Times, Hollywood Foreign Press Association, National Council of Teachers of English, among others. She is the current Santa Clara County Youth Poet Laureate.